A friend of mine sent me a picture of a section of wooden water pipe that was recently replaced by an irrigation district.  The district is in the state of Washington while the pipe seems to be in the state of disrepair.  Nah, actually it looks pretty good for as old as it probably is.  No one had records of when the pipe was laid originally, but this kind of wooden pipe was in use as early as 1850 on the East coast, and was common across the US in the late 1800's to about 1930.  Does anyone have knowledge of how old this pipe section may be?

It's an example of a wood-stave pipe.  This section is 20 inches in diameter and set at what looks to be a 10 or 12 foot joint, and wire-wound.  The individual joints were connected a number of different ways, but this picture doesn't reveal much about how these pipe joints were connected.  Many of the wooden pipes were designed to slip one end into an opposing end and the swelling of the wood when soaked up would seal the joints.  Other manufacturers would place a metal band around butted ends and seal it with tar or some similar material.  Fir, pine, redwood and other types of wood were commonly used as stave material. 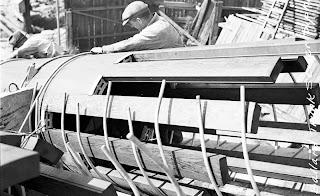 What I find more interesting is the continuous wood-stave pipe constructions as shown to the left.  As early as the late 1800's they were building continuous wood-stave pipes in the 12 and 14 feet diameter size for literally miles of water transfers.  Instead of all being the same length and built flush with each other, this construction method staggered the staves so that pipe building would just go on and on until you got to where you were going.

Of course, the really old wooden water pipes were tree trunks that were hollowed out, bored, reamed or burned out to let water pass through them.  They could be of any size, but most of the pictures appear to be 12-24 inch diameter trunks with the pipe part being 3-6 inches wide.  The picture to the right are of excavated wood pipes laid in Philadelphia sometime before 1820.  (Source: Cast Iron Pipe, Standard Specifications Dimensions and Weights (Burlington, New Jersey: United States Cast Iron Pipe & Foundry Co., 1914).)  These kinds of pipes have been in use since the 13th century and still were used as late as the early 1800's.

It's hard to imagine that wood pipes could last so long, but in some cases they are still being used after 75 to 100 years of continuous service.  In their day they were fairly inexpensive as the wood was readily available.  They were also very easy to tap into.  In fact, there are accounts of early-day fire companies who would routinely dig up city pipes and tap (drill) into them for fire fighting water.  When done, the fire company would plug the tap, and mark the plug spot before filling in the hole (for future use if needed).  Some say this is the origin of the term "fire plug".  Sounds reasonable to me.

Anyway, there is not a lot of information on the disadvantages of wooden pipes - other than perhaps the impressions that clay, concrete, steel and the newer-yet materials would last longer and go in faster.  I wonder if the early medical annals ever documented any cases of lignin poisoning...

(September 25, 2012 P.S. - Just ran across this article from Ketchum, Idaho about another wooden water pipe on private property in that city.  Enjoy.)

Posted by Katherine Wilkins-Wells at 8:00 AM

Katherine Wilkins-Wells
Colby, Kansas, United States
Welcome to the GMD 4 blog. I manage the Northwest Kansas Groundwater Management District No. 4 which covers 3.11 million acres in all or parts of 10 Counties overlying the High Plains Aquifer (Ogallala). Everything published here are my own ramblings on watery things I find interesting - even some of our own GMD work from time to time. Comments are welcome, but please try to make them helpful, informative and on-point. Finally, if you've come into the blog somewhere in the middle, just click the Banner to go to the Front Page.